Just want to take a moment to let blog readers know the latest episode of my podcast, The Walking Leader, is out now. Episode #159 entitled “Leadership is Everyone’s Business” is now available. 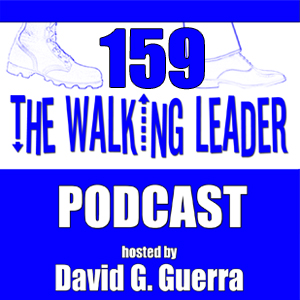 In this episode, sadly, far too many people believe that leadership is solely the property of those with a title, a degree, or tenure. While there is something to be said for those individuals who have but in the work to achieve that title, earn that degree, or outlast others. However, what about everyone else? Simple, they are leaders as well. The rules, guides, suggestions and premises behind leadership are not the dedicated to those who manage others, they are for everyone. Everyone that wants to not only improve themselves but actively pursuing the success and growths of others, of creating new leaders. New leaders because leadership is everyone’s business.

In under 7 minutes long, I invite you to take a listen… 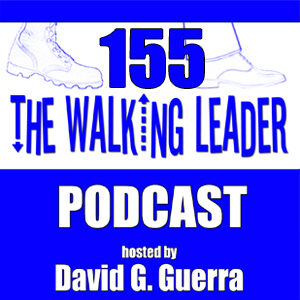 There comes a time when ALL leaders will face certain challenges. Not the everyday kind of challenges but those challenges that in the end will set you apart from the rest of the crowd; the pack. Those challenges are those that require you (as a leader) to step up and take the reins of the situation. People that follow you or will eventually follow you will see that you have the GRIT (courage and resolve; strength of character) to a leader worthy of their followership.

Developing your grit as early as possible is something that will most certainly benefit you for all the days and challenges to come. As a leader that has developed their GRIT also knows that those future challenges will NOT be easy nor will be difficult. They will be faced head on by that leader because she or he knows that the challenges must be addressed in the most direct and appropriate manner. Developing that GRIT allows leaders to see beyond the barriers and through the walls those unique challenges bring. Followers want a leader that is already working beyond the barriers long before the walls and barriers are breached. Leaders that have moved beyond those obstacles are the leaders that are continuously honing their TRUE GRIT and as always when it comes to being a better leader, a Walking Leader, honing your True Grit is NON-NEGOTIABLE.

Leaders are a very special breed of people. Special in that they recognize the need to constantly work at becoming better leaders. As leaders, they know the way to become better involves a very diverse and broad reaching actions. Actions deliver huge impacts on their growth but also serve as motivating factors for their followers. These unique leaders know that it all begins when they get out from behind their desks and walk the company floor. While out and about their actions and behaviors will be under close observation. They do this because they are leaders worthy of followers. These actions and behaviors will contribute to the continued growth of the leader, her peers, her followers, and all stakeholders.

#1 Leaders Get Out From Behind Their Desks
All Leaders know first hand they cannot lead sitting behind a desk. Leaders must get up from behind their desks and not only walk around their department but also walk the company floor. A leader that wants to become a better leader knows that being visible and available all while ensuring their duties and responsibilities are met are the kind of leaders that will move up in the organization. This does not mean that a leader has to schmooze but it does mean they have to get out and meet people. By meeting people, I mean they have to meet everyone in the organization not only the C-Suite. Being one of those individuals that would rather schmooze the bosses and look down on the receptionist does not even qualify as a bad manager. Don’t do it! If you are currently doing that, just stop! Get back on track and start shaking those hands. Greet people, go to them, do not wait for them to come to you. Smile, Say Hello and most of all, MEAN IT! Do not be like that bad manager and go through the motions. No matter what you do, always make time to get out there, either schedule it or force it but remain consistent. Oh, do not for one second think you can ignore your team. They take their cues from you, so ensure you visit with them as well.

#2 Leaders Say What They Mean and Mean What They Say
Resolving to becoming a better leader means the leader is always changing and evolving. However, not all things need to change only refined. The one thing that can never be changed is the leader’s authenticity, it can only get better through refinement. The leader that never flinches with what they say and what they do is a leader that cannot waiver from his/her duty and responsibility to those she leads. A leader that can be counted on to say what they mean and mean what they say will never be questioned as to their authenticity because their track record is proven. Certainly, I am not saying anything new here. I am, however, reinforcing that through constant growth, development, and refinement of who they are, what they stand for, and how they convey that message to everyone. Leaders may find that it is not easy to sharpen and refine their level of authenticity if they were to sit down and think about how they are going to be better. Sadly, to sharpen and refine means to get up and do. It means to get up off your backside and start doing.

#3 Leaders Value The Opinions of Others, Even If They Do Not Agree With Them
As the world is full of individuals that would rather use their powers for evil or nefarious acts, those that would use their powers for good get cast to the wayside. For those individuals that use their powers for good and are in positions of leadership are the lucky few. They are lucky because using their powers and abilities for good include valuing the opinions of others, especially if they do not agree with them. In this current political climate, there are so many varying views in the home, the work place, social gatherings, you name it. Leaders that value the opinions of others are also rare, few and far between but they are out there. Those leaders that make it a point to hear all sides of the argument are the leaders that will be around for a long time. Why? They respect people. They respect that uniqueness of individuals. They respect people enough to hear them out. This does not mean leaders have to agree with everyone. Remember, leaders cannot be all things to all people. Great Leaders know this as do the people that follow the leader. A Great Leader will have to weigh everything and then act on what is best for the group and sometimes, that is not the popular thing. Even when it is not popular, the one thing that all followers will agree on is that the leader took the time to hear and listen to them.

#4 Leaders Are NOT Quick To Judge
Leaders must never be quick to judge. To be fair and impartial, leaders are always at risk of being considered bias and partial, is not easy. However, a leader that is not biased and is impartial is one that has seen more than his fair share of bias, prejudice, favoritism, and other atrocities. A leader that has experienced that form of nonsense and can come out of it a fair and just individual is a leader worthy of leading and shaping the future of others. These are the leaders that will seek, gather, collect, and assess the information needed to make timely and sound decisions. A leader such as this will intentionally withhold judgment of others, especially when the information provided seems purely one-sided. A leader that has a sense of fair play will advocate for everyone to be heard and understood. Jumping to conclusions or delivering a decision before knowing all there is to know is the fast track to becoming known as unfair and unjust. Once tagged as unfair and unjust the leader might as well turn in his title as leader and consider himself a bad manager at best. This may sound harsh but the reality is there are still many individuals out there that through their own inability to do the right thing will continue to behave in such a manner. However, as a leader that believes in fairness, justice and equity is a leader that is making more leaders to not only become like her but better. Truly that is the leader’s ultimate goal.

#5 Leaders Never Front
Leaders are ORIGINAL. Leaders are UNIQUE. Leaders are ONE IN A MILLION. To be unique, original, and one in a million a leader must never front. Never put up a façade or a false front. Leaders do not have the luxury of fronting. Leader cannot afford to be caught fronting. A leader that fronts will quickly be discovered as a fraud, a fake and once labeled a fake or fraud, a leader almost never recovers. Why is it so difficult for a leader to recover from being labelled or considered a fake or fraud? Time and the Value of time. The time, effort, energy and value given to the leader by her followers. A leader will take her time to gain and maintain the trust of her followers. When that trust is broken then it becomes a deep, emotional loss. This loss is hard to replace. Remember, we are talking about leaders, real leaders, and not managers, especially when there is no love lost between a “micro-manager” and his employees. While it may be tempting for an up and coming leader to play a little “one-up” it is most certainly not beneficial to the career of that leader to even attempt to start or sustain that type of front. A leader, especially one that wants to improve themselves must not fall for the quick hits brought on by fronting but instead will work diligently to be original, unique and someone that will work to improve the trust between him and his followers.

These five things leaders do to become better leaders are just the tip of the iceberg of leadership. To become a better leader, you have to keep trying. You have to find what works for you as an individual. While many will say you have to do this or have to do that to be a great leader. What you have to do is find what works for you, stick to it, then add something else. A true leader will always seek improvement in themselves and in others. A leader that is on her way to become a Great Leader knows that doing what it takes comes with a price. The price is simple; never slack off and always stay on course. Yes, achieving Greatness is that simple. Many do not achieve that greatness because it looks like, feels like, sounds like and tastes like work.