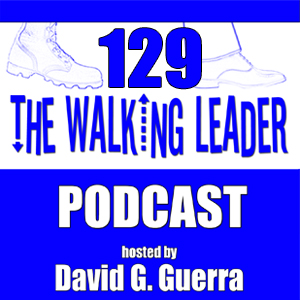 In episode #129, your host, David Guerra, talks about Honing Your Craft.
When it comes to being your best and doing your best you must know that you cannot rest on your laurel. You must always be honing your craft. When you want to be the best you have to beat the best. To be the best, you cannot for one second slack off when it comes to your craft. Remember, the moment you slack off is the moment is going to beat you. Why? Because they have continuously been honing their craft. Now get to work!

This episode is 15 minutes and ready for your podcast listening enjoyment.

Folks, last night I participated, once again, in my favorite Tuesday Evening Twitter Chat: #DareToBe.  As usual the #DareToBe Tweetchat is hosted by my friend, Andrea Sanchez (twitter handle: @asanchez16). The participants are a great group with each delivering insightful responses that typically lead to deeper discussions. This happens every Tuesday evening. To see some of the responses please click here (a new window will open),

Last night’s topic was DARE TO BE FEARLESS.

There are always Ten questions and Ten Answers plus a bonus Question and Answer.

Here are the questions and my answers.

Q1: Define fear. #DareToBe
A1. Fear is that little voice that SCREAMS at you when you are contemplating doing something new. #DareToBe

Q2: Name one fear that you believe holds people back. #DareToBe
A2. The fear of being considered a “loser” by complete strangers. #DareToBe

Q4: What can you ask yourself to determine if a fear is rational or irrational? #DareToBe
A4. Is your gut telling you to be afraid or are others (as in outsiders) telling you? #DareToBe

Q6: “Do one thing every day that scares you.” –Eleanor Roosevelt Agree/disagree? Elaborate. #DareToBe
A6. AGREE! 100% If you don’t feel just a small twinge of fear daily then what have you got left to do? #DareToBe

Q7: What are some often disguised behaviors associated with fear? #DareToBe
A7. The “You go first” or the “I hear my mom calling me” behaviours. beh#DareToBe

Q8: Give a tip on how one can calm down when feeling fearful. #DareToBe
A8. Take a deep breath, look up at the sky or if at night then look at the stars. Looking up helps to calm down. #DareToBe

Q9: Fear can also be good. What positive role can fear play? #DareToBe
A9. Fear can play a positive role in that it will force us to THINK things through before acting. #DareToBe

There you go my answers to the #DareToBe tweetchat. If you find yourself with some time on Tuesday evening, starting at 8PM Eastern/7pm Central, then please consider joining us for this awesome, insightful, thought provoking and always informative hour.

Transcription:
And good evening everyone, it is Friday. Friday March 1st the first day of the third month of 2019. I’m your host David Guerra and welcome to LET’S HAVE A CHAT (the Friday edition). That’s right, the calendar says it’s Friday and that means it’s time for Forbes Friday so again
straight from Forbes.com, Forbes magazine, the website, the email newsletters. Hey, if you haven’t signed up for the newsletters, check them out and do so. I highly recommend it and that’s where this one comes from. It’s a little snippet of something but it’s something I saw yesterday and it kind of got me thinking, of well the shape of things to come. Well actually three things happened in the past 24 hours, my oldest my daughter she’s looking for a job so she’s thinking about applying at J.C. Penney and then I’m going like well if they’re
still around to hire you’re more than welcome to and the next was I drove by a Payless Shoe Store with 40 to 50% off discount right now because they’re going out of business everything must go. Now in the Forbes Daily Dozen I saw that they were talking about Victoria’s Secret since 2015, the stock value slipped 75 percent and Victoria’s Secret still has not come out of that. How do they get themselves
out of it? Folks, they need to recognize that things are happening in the retail industry, the anchor stores are going…the anchor stores are those stores, the big stories at the malls, they’re the big ones like Macy’s, JC Penney, Sears it was once Montgomery Ward remember that and Woolworth’s back in the day. Well, that’s what’s going on is those anchor stores. They are going and slowly all the other ones
that aren’t keeping up are going and why are they disappearing? Why is Payless disappearing? Shoes? Everybody needs shoes, we all need shoes and Payless whoa! Everybody wants to pay less for shoes but again they have good shoes there. Don’t get me wrong I purchased from
there before and as matter of fact I walked in there and purchased a pair of sneakers yesterday at a great price.

So, what’s going on? Well, it’s plain and simple, if you’ve been on this planet long enough you’ve seen the little cardboard boxes with the little smiley face on it. No, no it’s not the it’s not a box from Brazil because it says Amazon and just like that box was not from Italy because it said Fra-Gi-Le. Nope it’s Amazon.

That’s right, Amazon, Amazon.com they’ve got everything, anything you’ve ever wanted. They’ve got it there that you could find it and if
you don’t they can probably wait a bit and somebody will sell it. I know this because I also am an Amazon seller and I sell on Amazon so I sell my stuff there and again full disclosure.

But is it taken away from the local jobs! NO! It’s just taken away from those that don’t want to compete, don’t want to as the kids say
“POST UP”, they are not doing that. They are not stepping up their game and if those local businesses, those brick-and-mortar stores do not want to step up their game then where they’re gonna go? By the way of what was once Hastings Records and Books. Remember that bookstore Hastings records and books? There we go *BOOM* Barnes & Noble came wiped them off the face of the earth and
then remember that Blockbuster Video? Same thing,  they had the opportunity to do what Netflix is doing.

They had the execs that chose not to they said oh that’s never gonna fly! You know who doesn’t fly anymore? That’s right, the CEO cuz he has no place to go. It’s just that simple folks. The times are changing and if you’re not changing with those times you’re gonna get exactly what you deserve. A couple years ago I wouldn’t have thought about sitting up here and standing up here in front of this doing live stream video. I would have thought about that but I resisted for the longest time I resisted joining Facebook but you know what, that’s where it was all going on. You’ve got to see the writing on the wall and you can resist it all you want or it’s like oh no they won’t change for me. You’re too late, you’ve already missed the boat the time is or the times already gone the ship has already sailed, that plane has already
taken off. That’s right so bon voyage, see we can’t even say bon voyage anymore now we have to say “bon voy” because someone’s changing with the times and we need also in business and leaders those that lead people, we have to be changing with the times.

I’m not saying be the next Elon Musk, I’m not saying be the next what’s his name, what’s his name, Zuckerberg! You know or anybody else no what I’m saying is be yourself but be yourself in an involving constantly evolving constantly changing state. You’re gonna find yourself you and your business are gonna find yourselves the way of the dinosaur, the way of Hastings, the way of Tower Records. Remember Tower Records? Yeah they have an online presence but it was nothing like Tower Records that was like the epitome of a record store. You look up
record store in the dictionary you saw Tower Records. That was it that was the place to go but where are they now it’s Amazon and iTunes and Apple. Where are they now? Where will Macy’s be in a little while, where’s JC Penney, where Sears, where’s Payless Shoes and unfortunately
Victoria’s Secret needs to ramp up their game. Sure they can one time a year do that that show or that risque show on on TV once a year but is that enough? No! It’s not enough. It’s not enough to bring in the money, to raise the stock value because again dropping 75% that’s a lot but if you’re delivering constantly and maintaining and working and improvising and innovating then guess what. You might just have a good thing on your hand and it’s worth the wait for it to grow back up. Now you know what four years later on the verge of five years later for Victoria’s Secret then what exactly nothing will happen.  Only the bad stuff will happen, unemployment, layoffs. chapter 13, bankruptcy, courts it’s crazy but it’s true.