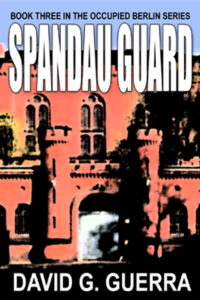 SPANDAU GUARD is set during Christmastime (December) 1979 at the infamous Spandau Prison in West Berlin, Germany. U.S. Army Infantryman Alfredo Ledesma along with his fellow soldiers, struggle through the 31-day rotation of boredom, cold Berlin nights, and the holiday season they can only see and enjoy from afar. A very interesting changeover with the Soviets, on December 1st, sets the basis for a story that reaches back to the very early days of the Third Reich.

December, along with April and August, are also the months the United States Army in Berlin is responsible for guarding Spandau Prison. As the month of Spandau Guard duty progresses, some strange things start to happen, especially at Guard Tower 3, and continue to do so until it all comes to a head on Christmas Eve. Soon, secrets are revealed that put Ledesma at the culmination of a long-time family secret.

Spandau Prison is home to the last of the Spandau 7; the seven convicted World War II war criminals (Konstantin von Neurath, Erich Raeder, Karl Dönitz, Walther Funk, Albert Speer, Baldur von Schirach, and Rudolf Hess) were sentenced to spend between 10 years to life at the prison. By the time Spandau Guard takes place, one resident remains and will do so until August 17, 1987 when Rudolf Hess allegedly “takes his own life”. However, that’s a different story.