Growing up I had always wanted to do two things: Serve my country and own my own business (to be an entrepreneur). Little did I know one day I would end up doing both. What else I did not know is that one helped me do the other. As a young Infantry soldier, I found myself quickly immersed in a world that was foreign to me. All those rules and regulations, inspections, road marches, and camaraderie that my fellow soldiers and I experienced helped make me the person I am today. What I did not know then is that one day I would become the leader of others. It was not by choice but a natural outcome of the training the US Army gave me, what I did on my own, during and after the Army, in gaining the skills, knowledge, and experience.

However, on the path to becoming an entrepreneur there were a few things that started to look familiar as many of the things that I encountered in the Army were popping up. The familiarity of the situations was almost too much to avoid. 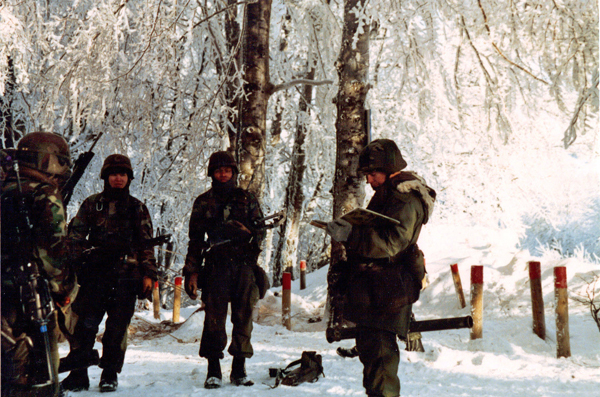 No amount of training can prepare you for the unexpected. However, the US Army does a great job of training its soldiers for just about anything. From a simple engine breakdown of a two and half ton truck to an all-out counter-attack by the enemy, the US Army just about has all the bases covered. That way when the unexpected happens you are prepared. It is kind of like keeping a case of water and a bug out bag in the trunk of your car during hurricane season, you might not need it but when a hurricane strikes, you are ready.

The same goes for running a business. While you know that you are going to need paper for the copier, why not buy an extra case, you know for just in case. The same goes for backing up your data. Planning for when all your staff catches the flu. The list goes on and on but let us hope you never need it but if you ever encounter the unexpected contingency planning (that is what it is called) will see you through until things get back to normal.

By planning and preparing, as a business owner, I am ready to face whatever may come our way. What makes all of that contingency planning even better is communicating that plan to everyone in your organization. By having shared the information of the plan you have now empowered your staff to do the right thing in just about any situation, expected or unexpected.

Heraclitus once said, “The only thing that is constant is change.” If there is one thing that is certain about the US Army or any other branch of the Armed Forces it is that that change is always happening. Sometimes, change might just crawl slower than a slug on a wet blade of grass and at other times, change comes slamming down on you faster than a palette of bricks that has lost its restraining straps as its being hoisted up a 10 story building.

While there is good change and there is bad change, 99 times out of a 100, for an Infantryman such as myself, change is seldom good. That is when you have to roll with the punches. Whether it is spending the entire day digging foxholes only to find out that you were digging five feet away from where they should have been dug. Guess what? You spend the entire night digging the new foxholes.

As a businessperson, the sooner you understand that every day brings new change, the sooner you can get on with living your life with some sense of sanity. The reality is there is nothing anyone can do to prevent change from occurring. Change comes in many shapes and sizes; the trick is to recognize how to deal with each change. You have to deal with it because ignoring it and hoping it will go away will do nothing more that make it that much harder to deal with bigger changes that are coming (and they are coming).

Make A Plan (Be Prepared to Throw It Away)

General Dwight D. Eisenhower made a great observation about plans and planning, “In preparing for battle I have always found that plans are useless, but planning is indispensable.” That about sums it up when it comes to plans or Operations Orders (OPORD as we called them). The entire command staff, (Adjutant, Intelligence Officer, Operations Officer, and Logistics Officer) would work with the commander to put a plan together. Ideally, this plan would cover all the bases on how to execute a mission from time to launch to time to return. In a very well thought out Operations (OP) Order all conceivable bases would be covered. It would be broken down to the very last detail. If most OP Orders were not classified, they would make for some great military reading that would in most cases rival Clancy, Coyle or Griffin.

However, one thing was certain. The moment the plan is put into action, it is just a matter of time before something happens that makes the plan worth less than the paper it was printed on. That’s right, the moment the bullets start to fly, the plan flies into the trashcan. Of course, there were some things in that plan that were useful and priceless like who was going to re-fuel vehicles where and when, what the radio frequencies are, and most of all where the beans and bullets could be found and some other useful stuff.

See the thing is that while we are using our plan the enemy (the competition) have their own plan that they are implementing. Why did it not ever occur someone to give a copy of the OPORD to the enemy to ensure that we were all one the same page of the battle plan?

The same goes for business. Sure, you can plan and prepare for the greatest opening day sale ever in the history of modern commerce but the printer cannot deliver your promotional items until the day after the sale, what then? Your competition decides to undercut your prices for one weekend only, your opening weekend, what then? Planning is one thing but the plan is something completely different.

You Are Part of a Team

From the first day of basic training to the day your term of service expires, you are part of a team. There was no introductory period, no time to get to know each other, nothing like what happens in the modern workplace. Immediately, you are thrown into the deep end with 90 or 120 other individuals. In my case, it was all males as we were going through Infantry training which has always been a male only Military Occupational Specialty.

Once assigned to our 30-man platoon, the Drill Sergeants made it clear that were in it together. We are a 30-man platoon and not a platoon of 30 men. This meant that we had to understand that we were a unit. We had to act as one cohesive unit. When we failed to act as a cohesive unit, we were held accountable together. One person screwed up that meant that we all screwed up. When the team screwed up, the team was punished. Then again, when we succeeded we were rewarded as a collective.

Collective punishment and reward made us hold each other accountable to the team and to ourselves as individuals. By being put in a team situation that early in the game (Basic Training & Advanced Training) made the adjusting to Army life that much more hectic and stressful but that’s the objective of being in the military. You have to hurry up and become a team because the enemy is not going to wait for you to become a cohesive fighting force. The enemy is always looking for those kinds of weaknesses to exploit. They can sniff out when a team is scrambling in 30 different directions and then it strikes.

The same applies for any business entrepreneur. The competition is not worried about you until you are nipping at its heels. In the meantime, your competition does not know you exist and whether you admit it or not is eating you for lunch. As someone who is in business, you do not have time to wait for people that do not get it, refuse to get it, or wonder what there is to get. All or any of those three do nothing good for the development of a sound, functional, and cohesive team. Your team must be ready to roll at a moment’s notice. However, it can only roll out and deploy knowing that it can meet the objective and defeat it. If one member of the team cannot do it then the entire team cannot be successful. Thus, you are NOT successful because as a leader you are still part of the team. You are part of the team you built. So build it with the right people to make the right team.

Hurry Up and Wait

Aside from quickly assimilating into the Army, life there was one other thing that we quickly learned: to hurry up and wait. We would wake up at 5:30 a.m. get down to the Physical Training (PT) field by 5:50 a.m. only to wait 10 minutes for the playing of Reveille and the raising of the colors. Then it was go, go, go until 12:00 p.m. where we moved to Mess Hall (Yes, we called them Mess Halls back then.) where we stood and waited in line to get to the serving stations only to wolf down lunch in five minutes. Then we would go outside and wait for everyone in the unit to finish eating.

Prior to deployments, we would hurry up and get to the railhead to load all our vehicles onto rail cars, which was another exercise in hurry up, and wait. Sure we would be there with all our vehicles and gear but for many of us it would be hours of waiting before we would get the opportunity to load our vehicles. Except for those fortunate to be at the head of the line it was quick to load. However, when it came time to unload those that loaded first well it just became their time to wait. So goes karma, yes even in the US Army.

As an entrepreneur, you want things to be done yesterday. Sure your vendors, suppliers, contractors and other stakeholders will do things on their own schedule thus forcing you to hurry up (to get things ready) and wait. All that “hurry up and wait” does is hone our patience. The ability to be patient as an entrepreneur is something that goes against our nature. However, there are times, things that we have no say in the matter, and we must hurry up and wait.

—–
David G. Guerra is a US Army Veteran, Small Business Entrepreneur, and Author (Fiction & Non-Fiction). David served with the US Army Berlin Brigade 110 miles behind the Iron Curtain during the Cold War. David also spent 17 years working for the State of Texas in the Information Technology field and successfully earning his Bachelor and Master degree in Business Administration along the way. Now working in the private sector has given David the opportunity to write and publish his first two of three books on leadership; “The Walking Leader” and “Great To Follow” and three historical fiction books set in Occupied West Berlin (“Doughboy City”, “Air Bridge Berlin”, “Spandau Guard”, “Parade Season”, & “The Taking of Sergeant Gonzalez”) with more of both genres to come.